A while back, I wrote briefly about a 16' Chestnut Cruiser slated for restoration. This model of paddling canoe is one of my favorites. I finished the restoration of this cruiser in the early summer of 2013 and had a chance to take it out for a test paddle one early morning. What a treat this canoe is to paddle!

The initial offering in the Chestnut Canoe Company's first catalog from 1905 wasn't large. The company offered only three models; the pleasure model, the cruiser model and the guide special model. Each of them in three lengths; 16 ft., 17 ft. and 18 ft. 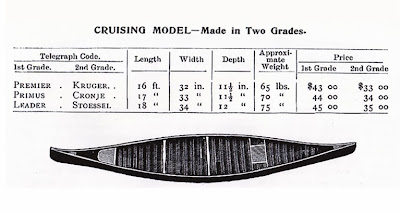 The Cruiser and Guide Special were always built on the same form. In the early years both models had a flat bottom, very slim bow and stern and high ends. In the mid 1910's the building form changed to produce a rounder bottom and changed again after the devastating fire in 1921.

Restoration of the Chestnut Cruiser 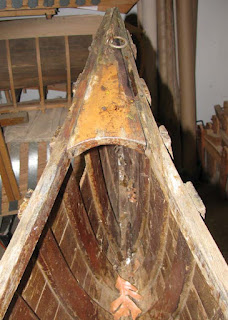 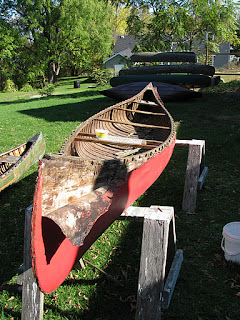 The customer did not know who had built it or when, only that the canoe had been around their cottage for a very long time and had spent at least the last 10 years on the ground under the cottage. After cleaning off the worst of the accumulated grime, I found a faint outline and a small remnant of a Chestnut Canoe Co. decal on the bow deck. The canoe's measurements, the very narrow decks and the slightly rounded hull bottom definitely identified it as a Chestnut Cruiser the Kruger model.

Initially I estimated the building date to be mid 1950's. However, a closer look showed a number of building details that point to an earlier building date of 1930's or perhaps even earlier. The canoe has no serial number, it has vertical grain planking and ribs, seats were bolted directly to the gunnels without the use of spacers, the thwarts have the typical earlier well rounded shape with tapered ends, and the decks are slightly crowned and nicely undercut.

This canoe had been worked on several times before. There was signs that the bow and stern height had been cut down a tad. The canoe's last canvas covering, was a Verolite canvas, and oh man what a mess and stink when I started to remove the covering. There was hardly any canvas left, just the outer vinyl skin, the rest mildewed and rotted away. When last re-canvased the hull exterior had also been made smooth with the help of drywall mud. It came off in large chunks. The hull interior was chemically stripped of its varnish and washed with several applications of bleach to remove most of the black stains.

The rot had spread to both inner and outer gunnels, the two top rows of planking and a good number of ribs and rib tips, resulting in the need to replace the gunnels, 9 ribs and splice in fresh wood to 18 rib tips and the stem ends.


With the wood work taken care of the canoe was well sanded inside and out. To blend all this new wood to the old, the interior received a wash of stain and was topped with four coats of varnish. The hull exterior was sanded smooth and treated with an application of tung oil followed by a coat of varnish.

A couple of weeks later the canvas was installed. The canvas was as usual treated with a zink-naphthenate mildewcide after installation.  A smelly but absolutely necessary job if the canvas covering is going to last. Use of respirator and gloves is essential, and leaving the canoe outside to dry. You don't want to breathe in the fumes from it. In the old times of lead based fillers this step wasn't necessary as the lead in the filler was a very effective mildewcide.

The filler needed only a light sanding to prepare it for painting. Three coats of a fire red marine enamel was applied with light sanding between coats. When the paint was dry the outside gunnels were installed. The seats had long ago lost its caning and the framework was severely cracked, so new seats were made patterned from the old ones. 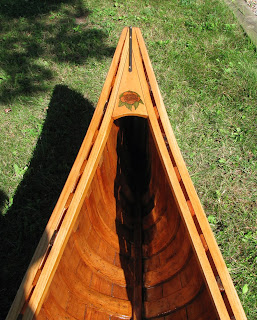 Posted by Wooden Canoes and more at 14:15