The Peterborough Canoe Co models: the High-end and Low-end Champlain

During winter, work slows down a bit and so do visits to the store and shop. However,

most  Saturday mornings see customers and visitors drop in. Some stay around for a cup
of coffee and canoe stories around the warm wood stove. Recently, one of my visitors wanted to know, how many different brands of canoes I had worked on, which were they and which model of them was the most common.

So I checked through my old files and notes; it all added up to a list of forty one names of old  famous canoe makers and some lesser known ones which had passed through my shop.

The most common ones are;

I     I was not surprised that the Chestnut Canoe Co and Peterborough Canoe Co took the
lead with Lakefield Canoe Co as a distant third. Those three companies, together,
produced an incredible amount of canoes over their life span and my shop is located right
in cottage country just north of Peterborough and Lakefield. As to the most common
models I have worked on, here is the group that was way ahead over the rest.
The visitor who asked the questions got very excited when finding out that the
Peterborough model, the high end Champlain, had made the list, as it is the canoe he paddles. He now inquired, did I know how long time this model was in production and
did I know anything about its background?


Here is a little bit of background on the Champlain models.


The Peterborough Canoe Co. model the "Champlain" showed up for the first time in 1936  in two versions, the “High-end” version with the model number 26P and the “Low-end”  version with the model number 26C. They were, however, just new names on models that  had been built for quite some time.The P stands for the Pleasure model and the C stands  for the Cruiser model. The monikers  High-end and Low-end has nothing to do with the  quality of the canoes, it actually describes  the height of the stern and bow.

The Low-end Champlain was recommended for use in camps, tourist resorts and boat liveries where a light, stable and easy-to-portage canoe was desired. It was introduced in 1936 with the model # 26C. So was this really a new model? No it was not! 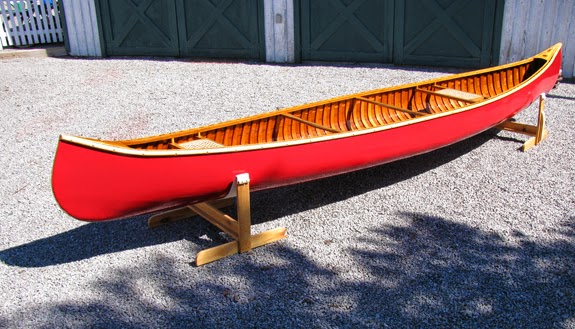 The model Low-end Champlain was available until the end of 1962, when the Peterborough Canoe Co. went out of business. It is worth noting that the Peterborough Canoe Co never built the Low-end Champlain model. It was built for them by their sister companies Chestnut Canoe Co and occasionally by the  Canadian Canoe Co. This Peterborough model is actually the same canoe the Chestnut  Canoe Co built and sold under the names Ajax, Moonlight and after 1954 with the name  Pal.

Posted by Wooden Canoes and more at 14:21 0 comments