As a canoe builder and restorer I am often asked: Which is your favourite canoe? Well, it’s not one, I have many favorites; paddling canoes, motor canoes, sailing canoes, some are canoes with interesting stories and some are favourites because of their construction, design and style. Here is one favorite, the Chestnut motor canoe, a rare one. I will occasionally present a few others that I think are worthy of special mentioning.

In the early 1900’s the internal combustion engine changed most aspects of life and commerce, on land and water. The most common small engine of the day was the single-cylinder, two-cycle engine often called “one-lunger” or “make-and-break”. One-lunger referred to the single cylinder and make-and-break referred to the ignition system. This little motor was used as marine engines, stationary engines powering farm equipment, sawmills, and washing machines, and much more. It was the choice motor for fishermen and pleasure boaters alike for the next two decades beginning around 1900. Motorized boats found an eager audience in a growing population with time and money to spend.

One of the first of the North American canoe builders to recognize this new market was the E.M. White & Co in Maine. Already in 1902 they had a stock model motor canoe for sale to the public looking for a new and modern way to get out on the water.

In 1905 the Chestnut Canoe Co was a small regional canoe maker, with its first catalogue just out, offering only three models. It is clear that the company a couple of years later was doing a very good business right across Canada with a large line-up of canoe models to choose from. Clearly, the Chestnut Canoe Co wasn’t shy about “borrowing” ideas and quickly had picked up on the idea of a motorized canoe. Their motor canoe, first offered in 1907, was an almost exact copy of the E. M. White & Company’s motor canoe with “invisible sponsons”.
The Chestnut Canoe Co introduced their 20 ft. freight canoe in 1907 and its hull was also used for the inboard motor canoe. Ten motor canoes were produced that first year. 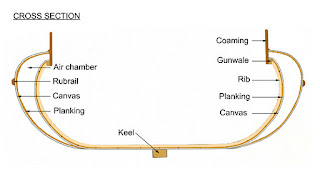 The cross section above shows the peculiar shape of the hull and the built in invisible air chambers which were added onto the full length of a canvassed hull and extending below the waterline. The hull was then again canvassed, filled and painted, making the air-chambers completely sealed. These chambers make the craft so steady that it is practically impossible to upset it and they make the canoe so buoyant that it will support more people than can be crowded into it.

The Chestnut inboard motor canoes were made in two lengths; 18-ft. and 20-ft. A range of options and equipment were available such as; Harlow awnings, special chairs and seats, spray hoods etc.
The canoes came equipped with the customer’s choice of three versions of an engine made by the St. Lawrence Engine Co in Brockville, Ontario. Their basic single cylinder engine model was produced almost unchanged for sixty years. Each engine was hand built one at the time.

By 1920 the inboard motor canoe models had disappeared from the Chestnut offerings and had been replaced with the new fad; the square stern canoe equipped with the outboard motor.

A Chestnut motor canoe with the invisible sponsons is quite rare, I know of only a handful, one of them in the collection at the Canadian Canoe Museum. Their canoe, or what is left of it, is unfortunately in poor condition and is missing all hardware, motor, propeller, tank and piping, bow & side steering wheels, rub rails, oak coaming, keel, seats, chairs and its canvas covering. Two feet of the stern have been cut off and replaced by a transom.

If any of you have a Chestnut motor canoe for sale, I am interested.

Posted by Wooden Canoes and more at 11:44