About 10 years ago I restored a couple of early 14' canvas covered canoes built by the Chestnut Canoe Co. Unfortunately, I lost the CD containing most of the pictures from those restorations. Last weekend the lost CD was found so here are some of the pictures and a write up on one of the restorations.


Almost 100 years ago, in May of 1914,
this canoe was purchased from the
Chestnut Canoe Co dealer Ketchum &
Co in Ottawa, by my customer’s great
grandfather to be used at the then new
family cottage at Britannia Bay just
outside Ottawa.

The canoe had been used by several generations and was now well patched
with duct tape, but otherwise in good condition. However, it needed new canvas, replacement of 3 ft. of planking,
repair to the inwales, careful stripping of
the varnished interior and new seat caning. 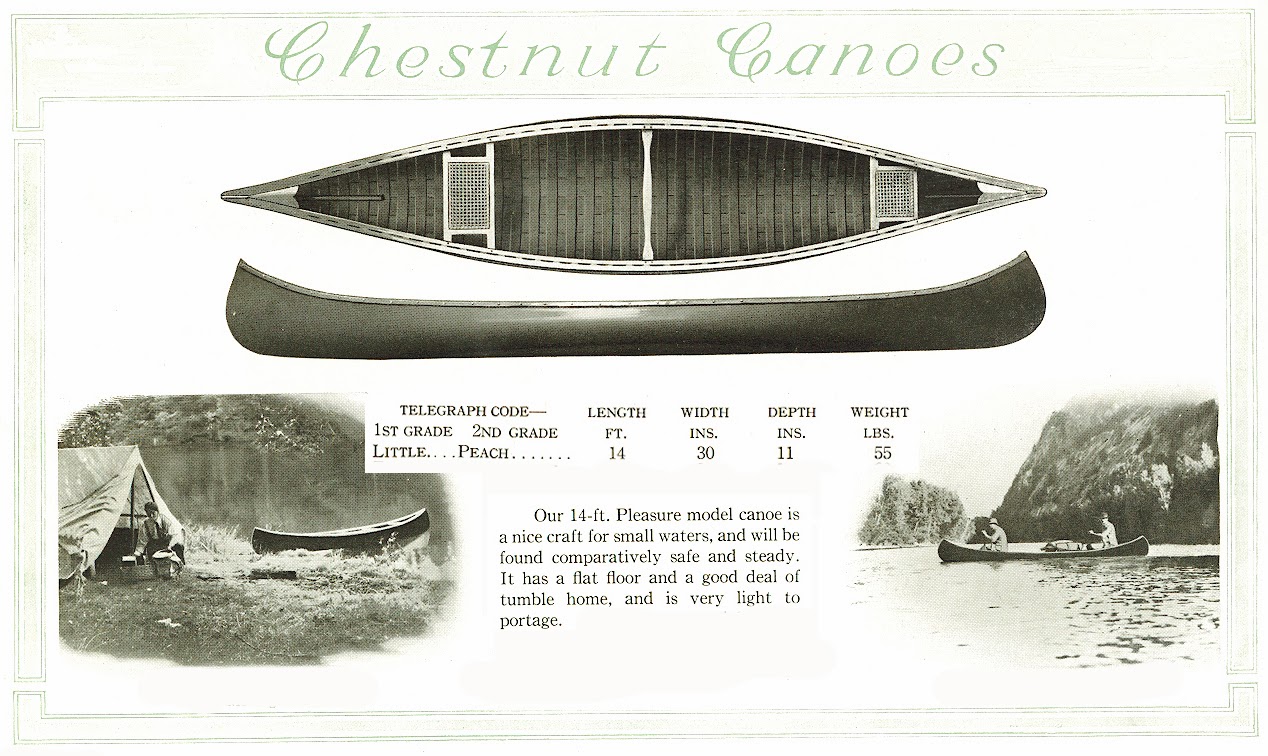 After stripping the canoe of its old varnish the real condition of the hull could be observed. The hull was remarkably well preserved and true for a canoe this old. A quick check in an old Chestnut catalog and I could identify the canoe as a 14' Peach model 2nd grade. Proof of this was quickly found; the stripping highlighted ribs and planking with small knots and not the best grain orientation.


The Chestnut canoes built in Fredericton, N.B. before the fire of December 1921 were significantly different from what was produced later. During the rebuilding of the factory, forms and jigs for most canoe models were changed. The side's "tumble-home" and the "kick-up" of the shear line in the bow and stern were reduced and many other smaller changes, all in order to speed up production and generate higher profits.


How to recognize a prefire Chestnut.

As mentioned above look for considerable tumble-home and high bow and stern profiles, closed gunnels or as here open gunnels where the rib tips are tapered and feathered along the decks to taper and close up the distance between inner and outer gunwales. Take also note of the peculiar notching of the stem tips. The thwarts should be nicely shaped with tapered ends. Seats might have sculpted frames and should be bolted directly to the gunwales without spacers. If your canoe is a pleasure model it should also have heart shaped, crowned and undercut decks and of course an old style decal if present.

The interior re-varnished, new canvas installed, filled, sanded and painted. Here I am gluing in small wood plugs in the old screw holes to make ready for installation of the out-wales.


Isn't this a sweet canoe? Here it is ready for another 100 years of adventures.

After taking the lines of the Peach for future builds it was off  to the beach for a test paddle.

Recently a lady called me asking if I had or knew of a Chestnut Indian/Maiden canoe for sale. She had seen the photos I had posted on Facebook of the latest Indian/Maiden I had restored for a customer  just last summer and wanted one. She had received one in birthday present in 1961. Unfortunately, that canoe had been destroyed in a storm some years later.

I have restored several of this model, but no, I didn't have one for sale. So this blog posting is a short write-up about that canoe model and if you know of one give me a call, I know of a motivated buyer.

From its humble beginnings in the early 1900’s and an offering of only three models, the Chestnut Canoe Co had grown quickly. With the end of WWI and a renewed strong demand for their canoes the company added many more versions to their line-up of canoe models.

The Chestnut Indian Maiden was one of those; it was introduced in 1922 in two versions, the Indian and the Maiden both 16 ft. in length. The difference was the finishes; the Indian with gunwales, thwarts, seats and decks trimmed in mahogany and the Maiden with spruce and ash gunwales, cedar decks and seats and thwarts in maple or ash.

The model was advertised as the craft for use at summer camps, resorts etc. and designed specifically for those wishing a jaunty looking distinctive model. It sure is distinctive, with its high and strongly curved ends. The hull-shape is very similar to the company's cruiser model with a narrow beam, an arched bottom and a very fine entry. In my mind, more a canoe for experienced paddlers not resort and camp paddlers.

The Indian/Maiden model was offered for sale until the mid-1950’s. In 1960 and 1961 it showed up again in the company’s catalog. The model was also sold by the sister company Peterborough Canoe Co under the name “Iroquois”in 1960 and 1961.

In 1978 the Chestnut Canoe Co "dusted off" the old form with the intention to produce a Special Edition of three hundred canoes of the Indian Maiden model. The model was proudly displayed at the“show circuit” of 1978.

Posted by Wooden Canoes and more at 13:47 0 comments