A canoe takes up a fair amount of space to store or to transport. It is not surprising that people have been looking for ways to get around this problem for as long as canoes have been made.

The well-known canoe “Harmony”, built in 1863/64, a decked sectional canoe owned, paddled and described in many magazine articles by Dr. C. M. Douglas, was likely the world’s first sectional canoe. It is also speculated that it inspired the building in 1865 of the Scotsman John MacGregor’s very famous “Rob Roy” decked cruising canoe. 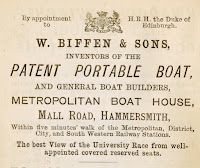 Dr. Douglas had “Harmony” built in England in 1863/64 by William Biffen of Hammersmith, near London. W. Biffen was a well-known boat builder of rowing skiffs and an inventor with a patent for sectional rowing shells under his belt. It is believed that Dr. Douglas saw W. Biffen’s exhibit of a yacht’s portable boat and sectional racing shells at the London International Exhibition in 1862 and commissioned Harmony built after the same concept. Harmony is 19'-10" long and with a beam of 24".

Originally, Harmony was a sectional canoe of three parts for ease of shipping and storing. Dr. Douglas used her for a couple of years in England. Then, on being assigned duty in India, Harmony was shipped to Lake Charles near Quebec City, where she was stored for 19 years. When he retired from service in 1882 Dr. Douglas brought her to his newly acquired farm Northcote in Lakefield, Ontario. He later converted her into a one-peace decked canoe and raced “Harmony” successfully for many years as a member of the Toronto Canoe Club. Newspapers of the time noted that Dr. Douglas often beat competitors who where 25 years younger paddling canoes which were 25 years newer.

Today “Harmony” can be found in the collections of the Canadian Canoe Museum. 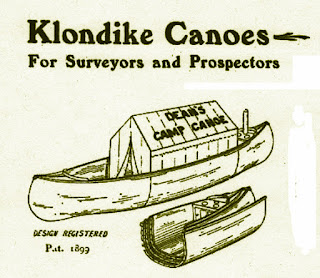 The well-known canoe builder Walter Dean of Toronto designed and patented what was probably the first North American made sectional canoe in 1898. Dean described the vessel in his 1898 catalogue:

'We now come to something entirely novel and startling in the idea of cutting a canoe in pieces and making it sufficiently strong and water-tight".

The canoe was built in three sections which nested inside each other for ease of transportation to the intended market in the north and specifically the Klondike gold rush. This canoe model was so successful that in 1898-99, Walter Dean had to enlarge the boat shop four times.The canoe sold well, but as the gold rush dwindled so did the demand for the Klondike sectional canoe.

The next generation of sectional canoes was developed by Jack F. Hyde of Ontario Provincial Air Service. In the spring of 1924 the Ontario Provincial Air Service was formed by the Ontario Government to help protect the province’s vast forests. They set up their headquarters at the edge of St. Mary’s River in Sault St. Marie with their initial fleet of 13 World War I surplus Curtiss HS-2L flying boats. 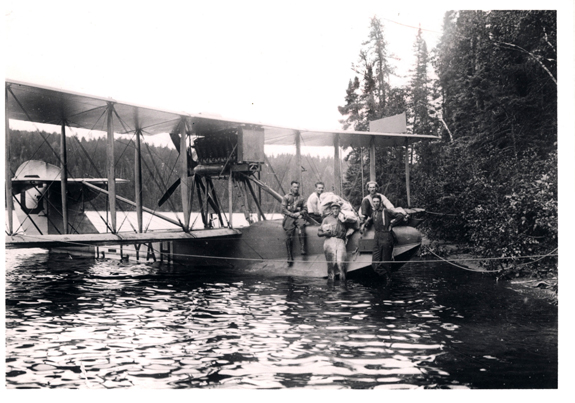 Jack F. Hyde had joined the Air Service in 1924 as a rigger/fitter. He was adept at finding innovative solutions to operating problems and was soon appointed aircraft foreman and in 1929 Plant Superintendent.

Beaching and mooring a flying boat was often a difficult task which would have been much easier if the crew had a canoe. Hyde designed a traditional canvas covered canoe which was split down the keel in two sections. These sections were secured to either side of the flying boat’s fuselage, forming two fairly aerodynamically acceptable bumps. When need arose to use the canoe, the two halves were merely removed and assembled.

It is likely that Hyde had a little help to start with from two Sault St. Marie canoe builders; Joseph and Ben Richards from J.A. Richards & Sons, later St. Mary’s Canoes, who had been in business nearby since 1912, building traditional canvas covered canoes.
Hyde’s first longitudinal sectional canoe design was followed by others as new airplanes replaced the flying boats. 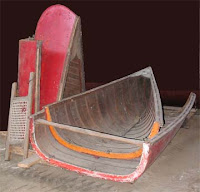 In 1927 new designs were patented which divided the canoes crosswise in three and four sections respectively, still using the same simple, quick and effective assembly system.

The Air Service built the sectional canoes for their own use as well as for the Ontario Forestry Branch.
In 1929 Western Canada Airways had the airplane ski manufacturer Elliot Brothers of Sioux Lookout to manufacture Hyde sectional canoes that could be carried inside their Fokker aircraft.

In the mid 1930’s Chestnut Canoe Co. and Peterborough Canoe Co. introduced their own models of sectional canoes for aircraft transportation as the market for such grew.
Other canoe builders quickly followed. 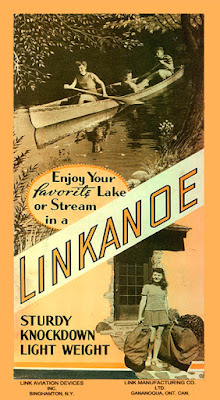 At the end of WW2,  Edwin A. Link a world renown aviation pioneer and the inventor of the flight trainer was searching for a way to keep his factories open. In the fall of 1945, he introduced his version of a sectional canoe.

The components of the”Linkanoe” came in two bags, and the canoe could be assembled in less than ten minutes. Ten sections of wood-reinforced Mikarta, were assembled and locked together to form the hull, which was then waterproofed by fitting a canvas sheath over it, which was attached to a series of hooks, beneath the outwale. Thwarts, seats, and two paddles completed the outfit.

Early advertising brochures touted the canoe’s sturdiness, good handling, and portability. ”Check it like luggage, stow it in the closet, or leave it in the trunk of your car,” the canoeist was urged. The canoe’s capacity was also a selling point; a 1945 advertising photo showed Ed Link in his canoe with a moose he had shot on a hunting trip. About 4000 Linkanoes were produced and sold between 1945 and 1949.

The sectional canoe is an example of a uniquely Canadian industrial development and design. They have served an important part in developing the North.

Collapsible and folding canoes are other examples of innovations and developments with significant stories to be told. Now, that is a story for another time.

Posted by Wooden Canoes and more at 17:39